Posted on October 11, 2013 by neilwilliamson

There’s two and a bit weeks to go before this year’s World Fantasy Convention down in lovely Brighton. I’m not doing terribly much at it, so you’ll mostly find me in the bar, but what will be happening at the con is the launch of a couple of anthologies which I’ve mentioned before here on account of them containing trace elements of me.

If you’re at the convention, The Alchemy Press are launching a number of books, including Astrologica : Stories of the Zodiac, at 12pm on Friday 1st November. And, as a taster, there’ll be a selection of short readings from those books at 2pm on Thursday 31st (warning: also contains traces of me). Alchemy Press are one of our most stalwart genre indies and produce great books, and Astrologica looks like being among their very best. 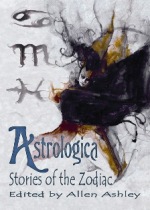 With fingers crossed for fair winds and plain sailing printer-wise, there will also be copies of Eibonvale Press’s new anthology release, Caledonia Dreamin’, at the convention too. I’m not sure if there’s an organised launch at this stage, but I urge you to seek the book out anyway. It has an amazing cover, and a stellar table of contents. With editors like Hal Duncan and Chris Kelso taking on the Scots language, it’s bound to be at the very least different!

So what am I saying here? See you at WFC if you’re going, if not – buy these books anyway!

2 thoughts on “Ready to launch”