The 2015 Stag & Dagger Presents Live At Glasgow** was a belter. We’d done the Spotify playlist, we’d made the Spreadsheet and for once the gods of scheduling smiled on us. All our top picks lined up nicely, with nae rushing around. All right we weren’t going to get dinner, but you’ve got to make sacrifices.

Really liked this year’s approach to the early part of the day with more venues open in the afternoon as well as films at the GFT and Loud Poets at the CCA. All the acts we saw were well attended without turning folks away too, and it felt like the festival really had it sussed this year.

So, to the bands themselves. You know when you’ve been to a gig and wake up in the morning and remember the diamond moments? I had that, but the moments were spread around at least half a dozen of the twelve acts we saw. The music was uniformly great, and the watchword the unifying them of the day was personality. There was some top banter all day long, and it kicked off in Broadcast with Declan Welsh who comes across like a cheeky wee guy who’s decided to do some busking to pay for his bus fare home after a night out. Great opener. Next up were Carbs: think home-knitted Glaswegian hip-hop with a sly sense of humour. Sent us onwards with a smile.

From there we skipped next door to Sleazies to see Sydney’s Service Bells whose set was marred by a rank mix. Dodging back to a place of safety, we managed to appreciate their tunes a bit better, and afterwards we hung around for Fraser A Gorman, a laconic Melbournite with a hugely engaging personality and a band that likes to have a laugh. His tunes are superbly laid back too. You can’t watch this guy and not have a good time. Kinda regretting not getting the tea towel from his merch now. Might have to do that when he comes back later in the year.

Time for a venue change. Up to the Art School to see the much-anticipated White, who totally owned the hype, took it into their sexy 80s pop workshop and supercharged it to fuck. Great tunes, huge energy, scads of personality. The kind of band that you just want to see again as soon as you can.

Downstairs we had a different prospect with the lovely C Duncan. Three disarmingly bashful lads who seemed perplexed to be playing their gorgeous tunes to a full room. And their tunes *are*  superb. Soft, intricately arranged, lovely vocals. Album is out in July apparently and will be one to pick up for sure.

Back upstairs after that to see an excellent exercise in Americana from three brothers and their mates (including the most laid back bassist ever) who go by the name of Sons Of Bill. Grand stuff.

Next on our list was Tobias Jesso Jr, a nice big lad from Canada on piano in the CCA. 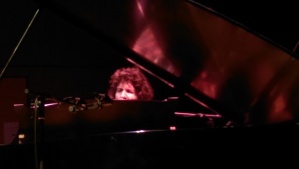 The CCA got the day’s prize for weirdly annoying audience members. Jesso’s intense and beautifully introspective set was offset by his affable lightheartedness, and it’s to his credit that he managed to laugh off the randomly ejaculated periodic whoops of uncontainable excitement from an unbelievable uber fan at the back of the hall. I mean, dude was seriously excited. Still, it became part of the charm of the set. Jesso’s album, Goon, has an unashamedly 70s singer-songwriter vibe – think early Billy Joel and you’re halfway there – and he carried it off superbly live.

Jesso’s cosy, low-key thing bridged nicely over to The Staves at the ABC.

Not sure that the noisy big venue at 9pm was really the best slot for them but they still managed to produce a highly polished set of astonishingly well blended folkish vocals. Mesmerising stuff.

Downstairs we had just enough time to catch a little of a much more rockish set from Childhood than we’d expected from their recorded material before nipping back to the CCA for Micah P Hinson. This dude is a proper character. He might even be a legend. He’s a guy who thinks out loud and it was a pleasure spending time joining the dots between thoughts. His songs were rich and earthy and full of history. If only someone had broken the legs of the loud-out-of-time-foot-stompy guy behind us, it might have been perfect.

The band we chose to close the night with was Dutch Uncles.

As soon as I heard their new album, O Shudder, I was absolutely sold on their smart, time-switching, danceable pop and live the punchy fusion of keys, guitars and electronic xylophone/marimba(??) was performed with a relentless energy in all probability drawn from the singer’s twisty-turny dance moves that see him winding and unwinding like a rubber band. A ridiculously exuberant set and a grand way to end the day.

Good job Stag & Dagger (or whatever you call yourselves now**). Brilliant line-up this year. Loved it.

**And, yeah, seriously, no one likes the name change.